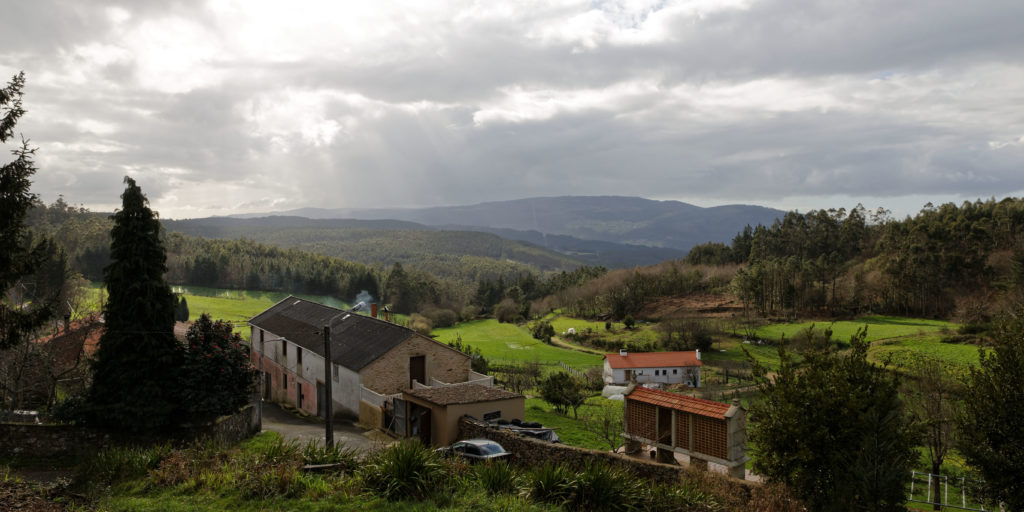 The forests of Galicia are the result of a long and complex history. Turbulent and conflictive on the one hand, but on the other showing an incredible historical strength where the local communities had to define and manage their territory facing external agents which had great capacity for intervention. The best proof of this strength is that today in Galicia there are 3,000 communities and they occupy nearly 700,000 hectares of the country. A substantial part of the territory is occupied by the forests (more than two million hectares in total), mostly in many regions of the southern half of Galicia, is managed by this little-known figure, although it includes half a million owners in common, a fifth of the inhabitants of Galicia.

The survival of a collective property of this calibre is certainly exceptional, although not unique, in a Europe that, since the nineteenth century, has struggled to adopt a well clarified model of ownership and where the predominance of individual private property was the preferred model. A collective property that, moreover, and unlike most of Europe, is not public but private. It does not belong to any administration but to all of the owners in common, without distinction of parts or economic differences. Now, if we consider that between the eighteenth and nineteenth centuries the vast majority of the more than two million hectares of forest in Galicia were subject to one of the various types of collective ownership, of which the communal (neighbouring) was the main one, we can get an idea of the historical turbulence to which these areas were subjected over the last two centuries. Privatization through disentailment in the 19th century and public intervention in the forest are, in that order, the two main state policies towards the communal areas (in Galicia and in the rest of the Spanish State). In fact, since the first half of the nineteenth century, the communal property disappeared legally. The property of these spaces was transferred to municipalities (by that time, municipalities were strange figures to the territorial organization of Galicia, which consisted of villages and parishes mostly). Until the laws of recognition of the communal property (1968, 1980 and 1989) the communal forests did not exist for the Law and the State, although they existed for the daily life of the local communities, who continued managing them.

The communal forests in Galicia include half a million owners in common, a fifth of the inhabitants of the region. It is a type of collective property that, moreover, and unlike most of Europe, is not public but private. It does not belong to any administration but to all of the owners in common, without distinction of parts or economic differences.

The legal history of forests communities is not what interests us most from a ecological point of view, but opens two very relevant questions to understand the relationship between houses, villages and territorial organization. First: what happened to the areas that today are not collective? Second: how have the communal forests survived more than a century and a half of no legal recognition and yet still today play a central role in many regions? Although the question is double, the answer is the same: the capacity of resistance of the local communities and the importance that the forests played for the spread of the rural houses. Unlike in other parts of Spain and Europe, the individualization/privatization of the communal forests was not carried out because of the disentailments of the 19th century, but rather because of peasant individualization, and over a much longer period, which modern historians trace back to the 18th century and contemporary historians prolong until the years of Franco’s dictatorship. The other great process of contemporary ownership in the Galician rural world is not related to dispossession but to the individualization of ownership: the redención foral, a law which terminated with the rents that farmers had to pay to the owners of the land. Both together played a central role in the configuration of Galicia as a country of farmers. Likewise, in those places where the communal forests, they continued to be, in practice, managed by the residents of the places and not by the local councils, even though the law had attributed ownership to them.

To understand this collective capacity to limit the application of one of the central policies of the 19th century liberal state, we must know that these areas were neither uncultivated nor merely complementary to family economies. We have to understand the use they had and the role they played. From very early on, the communal forests were the support that allowed the spread of family agriculture, providing fertilizer, food for livestock, firewood and wood and a multitude of other minor products. The agricultural system was revolutionised with corn, potatoes and meadows after the mid-eighteenth century. By that time, the forests will also be the engine of agriculture in Galicia in a context where there were no inputs of industrial origin. The forests were not a complement to the organic agricultural system based on the management of nature, they were an essential element of it. And it should also be borne in mind that in addition to maintaining the peasant world, that agrarian system was based on the economy of other social sectors, of a rentier nature, which dominated the political power in municipalities and councils in nineteenth-century Galicia. This also explains why, unlike other places, where the disentailment is strongly supported by local authorities, throughout the nineteenth century in Galicia there was a high consensus that the forests remain in the hands of farmers, by way of distribution among the houses or maintaining their communal character.

From very early on, the communal forests were the support that allowed the spread of family agriculture, providing fertilizer, food for livestock, firewood and wood and a multitude of other minor products.

In this short video José Rodríguez Cao was interviewed in the framework of the project and tells us about the uses of the mountains before the Franco regime, as well as the communal management by the neighbours (English subtitles available through the video settings).

Until 1936, the local communities directed the articulation of their local agro-ecosystems, in a sort of endogenous-based territorial planning, which would only be broken after the Civil War. The nineteenth-century liberal state did not succeed in altering the balance of power, but after the coup and the war, the Francoist state not only had an interest in intervening in the mountains of the northwest, but also the strength to do so. It was possible for several reasons. Firstly because the disappearance of the rentier with the peasant ownership in the first third of the 20th century broke the previous social balance. But above all, it was the new context derived from the violence with which the new totalitarian state was established, the change in local powers and the destruction of free civil society that explains why the dictatorship managed for the first time to make an effective expropriation that until then had been only nominal.

These are the times of reforestation and forestry. In the 1940s, 1950s and 1960s, the creation of consortiums between the new forestry instruments of the Franco regime, the Patrimonio Forestal del Estado (State Forestry Heritage), and the town councils not only prevented management by the local residents, but also substantially altered the balance of the agro-ecosystems, replacing multi-functional management with an autarkic, productivist forestry orientation that excluded any other use. Local communities could not prevent expropriation but responded against these policies, making forest management by the PFE difficult or even impossible.

In the 1940s, 1950s and 1960s, the creation of consortiums between the new forestry instruments of the Franco regime, the Patrimonio Forestal del Estado (State Forestry Heritage), and the town councils not only prevented management by the local residents, but also substantially altered the balance of the agro-ecosystems, replacing multi-functional management with an autarkic, productivist forestry orientation that excluded any other use. […] But in some cases the communities are finding new ways to reintegrate the forests to the territory, reusing knowledge and uses known by the villages and reinventing a new multifunctionality away from the forest monocultures.

This underground conflict was the reason why the dictatorship itself returned many forests to the local communities, with a law that was passed in 1968. Forestry interventionism was the most lasting legacy of the dictatorship in terms of the territorial management. It irreversibly altered the territorial balance, making many farms unviable and expelling many local inhabitants who needed the forests. It also played a central role in the adoption of the industrial agriculture model in Galicia in the sixties and seventies. In this way, the communal forests today have little to do, with few exceptions, productively with the forests that existed before 1936. But in some cases the communities are finding new ways to reintegrate the forests to the territory, reusing knowledge and uses known by the villages and reinventing a new multifunctionality away from the forest monocultures. 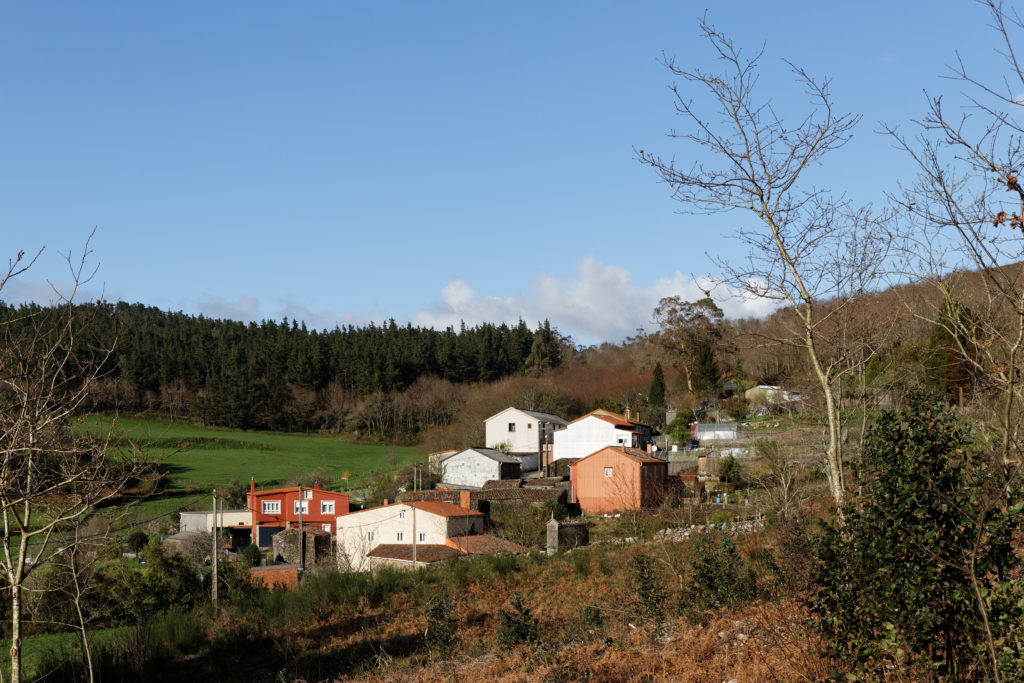 Froxán (Lousame) is a village marked by the fact that it was one of three that were occupied at the end of the 19th century by the San Finx mines. These mines exploited tungsten, which led to the common land being occupied and the local population being denied its management.

Juan Pan Montojo: Can the past generate new visions of a more sustainable future?

The Barbanza Ecosocial Lab looks to the past and seeks to imagine a sustainable future based on a biocultural heritage that still underpins the communities that inhabit the territory.